Mark Meadows has been summoned to testify in the Trump investigation. 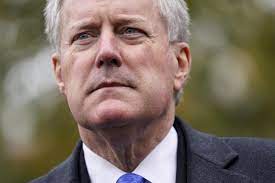 “We have reviewed [Meadows’] arguments and find them to be manifest without merit,” South Carolina’s Supreme Court justices wrote in a brief opinion.

The decision upheld a lower court’s decision requiring Meadows to testify in the Fulton County grand jury investigation led by District Attorney Fani Willis. Meadows was supposed to testify on Nov. 30, but it’s unclear if that date is still set.

Meadows’ attorneys and a spokeswoman for Willis did not immediately respond to requests for comment.

The decision of the five-member court was only three paragraphs long. It referred to the “urgent circumstances involved,” but did not elaborate on the dispute.

Willis sought Meadows’ testimony in September as part of her extensive investigation into Trump and his associates’ efforts to disrupt the Georgia election process, including his push for Secretary of State Brad Raffensperger to “find” enough votes to overturn Joe Biden’s victory in the state.

The dispute over the Meadows’ subpoena ended up in South Carolina courts, using procedures that many states have agreed on to enforce court orders issued by courts in another state. Willis must first obtain permission from local courts to compel testimony from out-of-state residents. Meadows is a South Carolina native.

Willis’ grand jury has requested testimony from a slew of high-ranking figures in Trump’s orbit, particularly those most closely associated with his attempt to rig the 2020 election results. Attorneys John Eastman, Jenna Ellis, Boris Epshteyn, and Kenneth Chesebro are among the witnesses she has sought. She also recently obtained testimony from Sen. Lindsey Graham (R-SC), who appeared after the United States Supreme Court granted Willis permission to question him.

Willis has also investigated Trump’s Georgia allies who signed documents claiming to be the state’s legitimate presidential electors as part of the Trump campaign’s larger plan to disrupt the transfer of power on January 6, 2021.

Meadows, on the other hand, is the most important figure in her investigation who has been summoned. Meadows traveled to Georgia during the state’s post-election audit and joined Trump on his Jan. 2, 2021 phone call with Raffensperger, in addition to his prominent role in Trump’s orbit in the weeks leading up to Jan. 6.

You May Like it :  An optimistic Google expects the Pixel 7 launch orders will be its biggest ever

Meadows argued in a South Carolina county court that his appearance before the grand jury was barred by executive privilege, but state courts rejected that claim.

Despite his wife death during childbirth a Nottinghamshire father

Some women who settled lawsuits against Deshaun Watson will attend the game.