Musk Twitter is rife with hate speech as trolls push the boundaries. 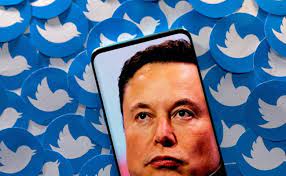 Musk Twitter is rife with hate speech as trolls push the boundaries. Following Elon Musk’s acquisition of Twitter Inc., a flood of slurs and racist memes flooded the platform, raising fears that the site is entering an era of hateful speech.

Twitter has long struggled with how to fairly enforce content policies on its platform in order to satisfy advertisers, users, and powerful world leaders who use the service. However, as Musk, a self-described “free speech absolutist,” took control of the company, some conservative officials, partisan extremists, and conspiracy theorists saw reason to rejoice.

“It appears that this is a group of people who believe that the rules magically changed as soon as he signed on the dotted line,” said Katie Harbath, CEO and founder of Anchor Change.

According to Dr. Rebekah Tromble, director of George Washington University’s Institute for Data, Democracy, and Politics, as soon as Musk took control of Twitter, online trolls began encouraging each other to push the boundaries on Twitter.

“Unfortunately, this spike in the hateful language is entirely predictable,” Tromble, a long-time Twitter observer, said. “It’s a game for most of these trolls.” Others, including some political influencers, believe that saying hateful, outrageous things helps them increase their audience and make money. And they see this as an excellent opportunity to attract even more attention.”

The flood of speech highlights Musk’s challenge in fulfilling his promise to restore people’s ability to speak freely while managing the platform’s palatability for advertisers, to whom he promised in a letter Thursday that Twitter would not become a “free-for-all hellscape” under his leadership. Musk has repeatedly criticized Twitter’s enforcement strategies, such as permanently banning some high-profile accounts.

Despite the fact that Musk has already fired four Twitter executives, including Vijaya Gadde, the company’s head of legal, policy, and trust, who led a team that decided whether to permanently ban certain high-profile accounts, he has yet to make any concrete or significant changes to Twitter’s moderation policies. Nonetheless, some conservative politicians and pundits saw his acquisition of the platform as a symbolic victory on Friday.

You May Like it :  The Bank of England anticipates the UK entering its deepest recession ever.

Greene simply tweeted on Friday, “We are winning.” According to Bloomberg, the congresswoman has gained at least 40,492 new followers in the hours since Musk took over Twitter.

Rep. Jim Jordan, a Republican from Ohio, also praised Musk’s takeover of Twitter in a Friday morning tweet: “Free speech. “Lots of tears.” According to Bloomberg’s analysis, he gained at least 40,419 followers during the same time period.

Other partisan accounts with a history of spreading false claims that the 2020 US presidential election was stolen tested the limits of free speech under Musk’s Twitter regime. On Thursday night, Robby Starbuck, a former Tennessee congressional candidate, and Trump supporter tweeted a transphobic and misinformation-filled message, prefacing it with, “Just testing the new Twitter out.”

@catturd2, an influential anonymous account with nearly 1 million followers, claimed that it had been “shadowbanned” on Twitter. It was one of the few accounts to which Twitter’s new CEO responded on Friday morning: “I will be digging in more today.”

A peer-reviewed report from the Election Integrity Partnership, a group of research organizations studying misinformation campaigns, including the 2020 election, included the Starbucks and @catturd2 accounts on the list of repeat misinformation spreaders.

According to Bloomberg, dozens of anonymous trolls joined Twitter in the last day, addressing topics that had previously been heavily moderated by Twitter, such as levying hate speech against protected groups and spreading misinformation about Covid-19 and its vaccines.

Overnight and into Friday, racist slurs, anti-Semitic speech, and offensive memes proliferated on the platform, with users encouraging one another on far-right message boards like The Donald, messaging apps like Telegram, and internet forums like 4chan.

Former Russian President Dmitry Medvedev welcomed Musk to the platform with a post of his own. On Friday, he tweeted, “Good luck @elonmusk in overcoming political bias and ideological dictatorship on Twitter.” “Stop that Starlink in Ukraine business,” he added.

An 8-year-old boy has become the youngest person to scale California El Capitan.