Poilievre’s remarks on the inflation of cryptocurrencies prompted official paperwork. 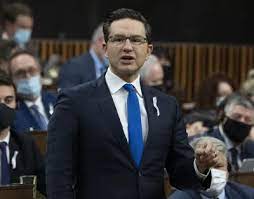 Poilievre’s remarks on the inflation of cryptocurrencies prompted official paperwork. According to a government document, senior federal bureaucrats investigated whether or not cryptocurrencies protect against inflation soon after Opposition Leader Pierre Poilievre made the claim as a candidate for the Conservative leadership race.

In the weeks following Poilievre’s late March comments, the Privy Council Office, which is responsible for providing objective advice to the prime minister and cabinet, drafted a briefing note on the potential of digital currencies for the head of the public service.

Using an access-to-information request, The Canadian Press was able to obtain a briefing note that states, “in light of inflationary pressures, some proponents have touted the ability of crypto assets like bitcoin and Ethereum to ‘decentralize’ the Canadian economy, providing a substitute for the national currency.”

Despite widespread belief to the contrary, the document was delivered to the clerk of the Privy Council at the start of May and asserts that cryptocurrencies have not offered protection against inflation and are poor substitutes for the Canadian dollar for day-to-day transactions.

Officials in charge of public access to the information say the assets’ “extremely volatile” price fluctuations make them unsuitable as “a store of value, a key feature of a well-functioning currency.”

Because of their primarily speculative nature and price behavior that is similar to that of risky assets, “crypto assets have also not hedged against inflation.”

According to a Privy Council Office spokesman, the purpose of the briefing note was to educate the clerk on crypto assets and answer questions like “have they offered protection against inflation?”

Late in March, at a campaign event, Poilievre had argued that, since digital currencies are not controlled by central banks, they could help Canadians “opt-out of inflation.”

Poilievre pledged to make Canada more cryptocurrency-friendly during an appearance at a London, Ontario shawarma restaurant that accepts digital currency.

Bitcoin’s value, like that of other digital currencies, crashed over the summer, losing more than half its value from the beginning of the year.

This briefing note examined the claim made by “crypto asset proponents” that monetary stimulus is the primary cause of high inflation and rising prices of goods and services.

Though cryptocurrency’s popularity has grown, “there is no clear expectation” among regulators, central banks, and the financial sector, according to a Privy Council briefing note.

It warns that a more stable and widely used cryptocurrency market could make monetary policy less effective and lengthen recessions.

The former head of the Ontario public service Senator Tony Dean has stated that briefing notes are routinely prepared by public servants on a wide variety of issues, and are sometimes prepared proactively, without a request from the top.