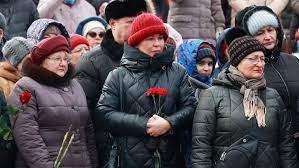 Russia blames cellphone use for Makiivka attack: Putin sends new hypersonic cruise missiles to Atlantic. After a Ukrainian strike on one of its military units in Makiivka, a city in the partially Russian-occupied Donetsk region in eastern Ukraine, Russia has been left reeling as the death toll rises.

Russia’s Defense Ministry reported Tuesday night that 89 servicemen had been killed in the attack on New Year’s Eve. It claimed that Ukraine could track down and destroy its employees because they were using their phones illegally.

Since the beginning of 2023, Ukraine has seen no relief from the war. Since New Year’s Eve, Russia has been launching relentless strikes, which President Volodymyr Zelenskyy has described as an attempt to “exhaust” his country.

Read more: McCarthy Scrambles For Support As The GOP Battle Over Who Will Be The Next Speaker Enters Its Second Day.

Ukraine is ready for any new Russian offensives, its president said on Tuesday night, claiming that Russia would “throw everything they have left” into the conflict.

As Russia’s war in Ukraine drags on, the Czech government passed a bill to increase defense spending to the NATO-mandated level of 2% of GDP.

According to Defense Minister Jana Cernochova, this will “ensure a stable and transparent financing of big defense strategic projects in the future.”

War in Ukraine, according to Cernochova, “made it clear we have to be ready for the current and future conflicts, and that is why a fast modernization of the army is essential.”

The Czech Republic will only spend 1.52 percent of its GDP on defense this year, but once the bill is approved in parliament, where the governing coalition has a majority in both chambers, the 2% target should be reached in 2024.

In 2014, NATO members pledged to meet the spending goal of 2% by 2024. At present, only 9 out of the 30 members of the Western military alliance reach or exceed that standard.

You May Like it :  House members will vote on a proposal to defund Ilhan Omar's membership on the Foreign Affairs Committee.
21
Share

A Quick Guide How to sue someone with no insurance