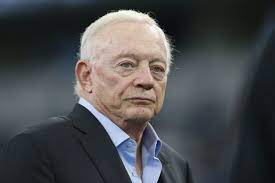 San Francisco’s short-week game doesn’t bother Jerry Jones. There was some strange complaining before Monday night’s Cowboys-Buccaneers game about the winner having to face the 49ers on a short week while the 49ers had a whole week and a day to rest and prepare.

The Cowboys trounced the Seahawks on Monday night, and owner Jerry Jones stated he had no problem with his team going back to Dallas and then to California this weekend for Sunday’s game.

Jones responded to reporters’ claims that the Cowboys’ schedule is “unfair” by saying, “Not at all.” Actually, no. Indeed, that’s the hand we’ve been given. We were able to perform for the entire country. Our preparation time for tonight was extended by a day. I think this is a good thing. So, we’ll head out to the field for a short week. We’ve played on Thanksgiving and shortened weeks before. To me, that’s not a negative aspect.

Knowing that the current three-day wild-card schedule benefits everyone’s wallets, including his own, Jones is forced to make that statement. When games are played on Saturday, Sunday, and Monday, it’s impossible to give everyone a fair amount of time to relax and recover.

Is this the best option? Transform into a superior seed. Your best bet to avoid making costly trips during the wild card round is to win your division. Be the top seed, and you won’t have to worry about playing in the wild card bracket.

It’s possible that it doesn’t even matter if you’re the superior seed. In 2016, the Rams had a Monday night game and then had to fly to Tampa for a Sunday matchup. The Buccaneers dropped a contest despite having played on Sunday and not having to travel. In a similar vein, the 49ers played on the Sunday of the wild-card round and then met the Packers on the following Saturday, giving the Packers a week to rest up. The Packers from Green Bay ended up losing.

Such problems will arise unless all playoff games are held simultaneously and on the same day. Teams can either moan about unfairness or get their act together, seize the chance, and advance.