Southwest Airlines has continued to cancel flights as the New Year holiday approaches. 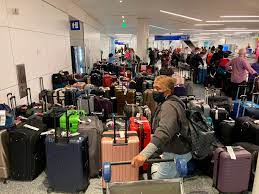 Southwest Airlines has continued to cancel flights as the New Year holiday approaches. Passengers in the United States who were hoping for a weather-free flight on Tuesday after a disastrous week of cancellations and delays should plan on being patient for a few more days, especially if they were booked on Southwest Airlines.

According to the flight tracking website FlightAware, as of 9 a.m. On Tuesday, more than 2,892 flights were canceled in, into, or out of the United States.

Southwest Airlines operates 2,522 of those flights and is responsible for most cancellations.

After a full day of post-Christmas travel mayhem on Monday, when 3,989 flights were canceled (including 2,909 Southwest flights), the airline decided to cancel an additional 111 flights on Tuesday. The airline industry also had a rough year before Southwest’s Christmas woes. Nearly a quarter of domestic flights in the United States experienced delays or cancellations this summer.

Southwest warns that flight cancellations and delays will likely continue for several more days. Representatives say the Dallas-based airline plans to scale back its flight schedule to get operations back on track.

Southwest Airlines chief executive officer Bob Jordan told The Wall Street Journal that the airline would operate slightly more than a third of its schedule over the next few days to allow crews to get into the correct positions.

Jordan reportedly said that the shorter schedule might be extended.

“Today was a challenging day for us. Speaking to WSJ.com on Monday night, Jordan predicted that Tuesday would be “another tough day” as the team worked to recover.

I’ve never seen anything on this scale before.

Because of a chain reaction of problems, Southwest took a severe hit.

Chicago and Denver, two of its major hubs, were hit hard by the storm at a time when Covid and other winter illnesses were straining staff resources. Southwest’s overly ambitious schedule and lack of investment are also being held responsible.

FlightAware reports that 3,178 flights were canceled, and 6,870 were delayed on Christmas Day.

According to FlightAware, 3,487 flights were grounded on Christmas Eve.

With 5,934 cancellations on Friday, it was the worst streak day, while Thursday saw nearly 2,700.

You May Like it :  Brazil's police gather at Bolsonaro's supporters' camp after storming the capital.

Where can those travelers turn for help?

Long lines of people waiting to rebook flights or make connections were forming at the Southwest ticket counter at Hartsfield-Jackson Atlanta International Airport on Tuesday morning.

Trisha Jones, a passenger who disembarked in Fort Lauderdale, Florida, told CNN that she and her partner had spent five days traveling to get home to Wichita, Kansas.

Her original departure was canceled, so she stayed with family before rerouting to Atlanta to catch her connecting flight.

Jones: “My family lives in the Tampa bay area, so we were able to rent a car to go see them for Christmas because we were in Fort Lauderdale.” Seeing so many children and their parents sleeping on the floor is heartbreaking.

On Monday afternoon, CNN tried calling Southwest but could not get through. This prevented customers from joining the waiting list to speak to a representative. According to CNN, Southwest has “fully staffed to answer calls.”

In the event of a flight cancellation, the airline promises a full refund or an indefinite flight credit.

If you’ve been left high and dry and need help getting through to a customer service rep, Scott from Scott’s Cheap Flights suggests dialing an international number in a last-ditch effort.

“Other passengers trying to rebook their flights will clog up the central hotline for US airlines. Scott Keyes advised passengers to contact any of the airline’s many overseas offices to speak with a representative as soon as possible.

“Agents can handle your reservation just as well as those in the United States, but with almost no wait time.”

Cancellations have the United States government “concerned,” according to a report.

In light of Southwest Airlines’ widespread flight cancellations on Monday, the US Department of Transportation issued a statement expressing “concern.”

Capt. Mike Santoro, vice president of the Southwest Airlines Pilots Association, told CNN on Tuesday that the airline’s current problems are the worst disruptions he’s seen in his 16 years with Southwest.

He said the storm from the previous week was a precipitating factor in the emergence of serious technical problems.

He explained that our IT infrastructure supporting the scheduling application that failed needed to be updated. The number of pilots and flight attendants in the system, along with the complexity of our route network, is too much for it to handle. Other significant airlines use hubs, but we need one. Because we operate on a point-to-point network, our pilots and ground staff may find themselves in undesirable locations.

You May Like it :  Man United has done a complete about-face on Pep Guardiola and Cristiano Ronaldo.

He continued, “It’s frustrating for the pilots, the flight attendants, and especially our passengers. Although the airline’s pilots genuinely feel for their passengers, they are tired of having to apologize to Southwest.

Santoro said his organization has been pressuring the airline to fix its structural problems for a while and that the current disruption has negatively impacted pilots.

Imagine over ten thousand pilots in the wrong city with no hotel reservations: “We have over 10,000 pilots, not all flying at the same time, but imagine everyone is in the wrong city, without hotel assignments, and trying to find hotels?”

The 2022 season is the first time the San Francisco 49ers have been ranked first.

Cardinals player J.J. Watt says this will be his last season in the NFL.