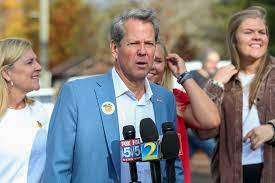 After midnight on Tuesday, Abrams gave her concession speech in front of her supporters in Atlanta’s downtown. Abrams claims that despite the failure of her bid for governor of Georgia, she will continue to advocate for Georgians.

Abrams declared, “I may no longer be running for governor, but I will never stop doing everything I can to ensure the people of Georgia have a voice.” “I entered this race solely with the intention of fighting. And not just any fight, but a fight to save Georgia and defend future generations on our behalf.

If she had won, Abrams would have been the first Black woman to hold the office of governor in the United States.

Abrams founded the voting rights advocacy group Fair Fight Action after her loss in 2018 and worked for four years to prepare for a second run for governor. Her national profile quickly rose, as evidenced by her fundraising efforts, and she quickly rose to prominence within the Democratic Party.

According to reports submitted to the state ethics commission, Abrams raised close to $98 million through October 25 while Kemp raised more than $69 million. The financial advantage enjoyed by Abrams proved insufficient.

Georgia Democrats are concluding this election with gratitude for the voters and optimism for the future, knowing that we gave it everything we had to fight for the principles we hold dear, even though this wasn’t the outcome we had hoped for. We are so proud of Stacey Abrams for running a historic campaign that changed the course of Georgia politics and lifted millions of people up.

Even though we didn’t win this election, we won’t stop fighting for One Georgia, a state where everyone has the chance to make a good living, where we increase access to healthcare, where public safety is prioritized over special interests, and where our freedoms are protected. “I want to say a huge thank you to all of the amazing volunteers, supporters, and everyone who was working on behalf of Stacey.

After losing 14.6 billion Sam Bankman-Fried is no longer a billionaire