Svante Paabo wins the Nobel Prize for his research on Neanderthals. 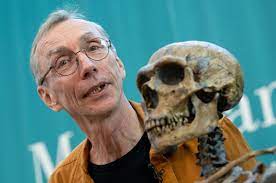 According to the Prize committee, he deciphered the genetic code of our long-lost Neanderthal ancestors, which seemed inconceivable at the time.

The discovery of the Denisovans, a previously unknown relative, was another “sensational” achievement of his.

His contributions aided studies of human evolution and global migration.

The work of the Swedish geneticist probes some of life’s most fundamental mysteries, such as where we came from and what made Homo sapiens so successful while their ancestors became extinct.

When he got the call that he’d won, he was on his way to pick up his daughter from a sleepover. ‘I was quite startled and overwhelmed,’ he told the BBC. ‘I had not expected this.

The 1990s saw a flurry of activity in the quest to decipher the human genome. But that needed DNA that had just been extracted from a sample.

Prof. Paabo was curious about the ancient DNA that has become polluted and damaged. This was seen as an insurmountable obstacle by many. However, he was the first person to successfully sequence DNA from a 40,000-year-old bone fragment.

The findings demonstrated that the Neanderthals, an extinct human ancestor largely found in Europe and Western Asia, were unique from both modern humans and chimps.

His research centered on hominins, the genus that comprises not just Homo sapiens but also our long-gone ancestors.

The Nobel committee praised his work, saying that it “provides the framework for studying what makes us distinctively human” by identifying genetic distinctions that distinguish all living humans from extinct hominins.

Additional comparisons of Neanderthal DNA to that of modern humans revealed that it was most similar to that of Europeans and Asians.

This suggests that after leaving Africa some 70,000 years ago, Homo sapiens interacted sexually and procreated with Neanderthals.

This has left a lasting impression, which is evident even now. Our ability to fight off infections is influenced by the 1–4% of our genome that originates from our Neanderthal ancestors.

Forefinger of a Caveman

In 2008, researchers made another monumental discovery related to our species’ past. The Denisova cave in Siberia is where researchers discovered a finger bone that was 40,000 years old.

Prof. Paabo sequenced the DNA, and the results revealed that the organism was indeed a new kind of hominid called Denisovans.

Additionally, it was discovered that Homo sapiens interbred with Denisovans. Somewhere between 6% and 11% of the population of Southeast Asia has Denisovan ancestry.

You May Like it :  Teen Is Cured from Cancer after Groundbreaking Therapy: 'It's a Miracle I'm Alive'

Present-day Tibetans carry some of the genetic makeup that allows them to thrive in high altitudes and low oxygen environments.

Professor Paabo was notified of his award this morning by Thomas Perlmann, the committee’s secretary.

Scientists consider Prof. Paabo a pioneer in the field of paleogenomics. He takes home £10 million (around £800,000) in Swedish kronor. His father, Sune Bergstrom, also won the Nobel Prize in this category back in 1982, therefore he is following in his footsteps.

His research proves that before the arrival of modern humans from Africa, two other hominin groups—the Neanderthals and the Denisovans—already inhabited what is now Eurasia.

A look at the numbers shows that the groups that have since vanished were likely too small and inbred to keep up with the advent of modern humans.

Jack Grealish has a fantastic day at work after sitting down with Casemiro.

Loretta Lynn Passes Away at the Age of 52

Obesity causes neurodegeneration of an Alzheimer’s…

Interest rate increases by the Federal Reserve are…

Officer Tyre Nichols’ death has resulted in the…

Rep. George Santos is resigning from committees because of…