To end its zero-Covid policy China has abandoned its inbound quarantine laws. 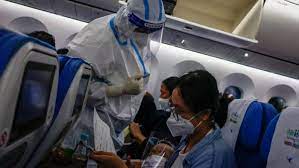 The decision was made public by the National Health Commission on Monday as part of a more extensive declaration that degraded the country’s management of Covid-19. This virus is now sweeping the nation and abandoned several other preventative measures.

As coronavirus spreads across a country where until recently, only a few of the 1.4bn population had contracted it, the NHC has stated that more than 90% of cases of the omicron variety were “mild or asymptomatic.”

With estimates of infections climbing into the hundreds of millions and health systems under strain, the government is fighting a catastrophic winter outbreak this month.

Read more: In The Buffalo New York Area The Death Toll From The Recent Winter Storm Has Risen To 25.

However, China’s published numbers no longer represent the situation on the ground, and other zero-Covid rules, such as mass-testing, have essentially terminated. Models have projected the virus might cause close to 1mn death.

Shortly after the initial pandemic outbreak, China instituted a zero-Covid policy, which included closing down many of its main cities for multiple years and enforcing quarantine measures on foreign visitors.

This program fell apart late this year as officials fought to suppress epidemics in several cities, including Beijing, the nation’s capital. In November, angry citizens took to the streets in a rare show of defiance, and the central government quickly loosened its stance.

After years of effectively containing a virus that had ravaged every other developed economy, China’s declaration on Monday marks the end of the zero-Covid system that had revolutionized the country’s interaction with the rest of the globe.

This year, there was a time when visitors had to check into a hotel for a minimum of three weeks due to quarantine regulations. Starting January 8th, you will have to spend less time in hotels.

Beijing, one of the epicenters of the outbreak previous to the policy’s abandonment, was regarded as one of the best-equipped cities. Still, the rapid removal of restrictions has already put enormous pressure on China’s healthcare system.

The policy’s economic costs have been made clear by recent data. In November, retail sales, an indicator of consumer spending, declined by 5.9% year over year, worse than analyst projections. The economy is on track to fail a yearly growth target of 5.5%, which was already its lowest in decades.

You May Like it :  Decades in the making: Researchers continue total artificial heart project

However, analysts have also raised concerns about the economic and corporate implications of the virus as it sweeps across the country, with Apple being one of the companies that could be affected by additional supply chain troubles.

Citizens of large Chinese cities were expected to undergo random testing at booths every few days and then scan a code with their phones to gain access to restricted areas. Although people were still being sent to central quarantine in Shanghai in late November because they were close contacts of positive cases in bars, this practice has largely faded away as the number of cases has increased.

In the Buffalo New York area the death toll from the recent winter storm has risen to 25.

Before Christmas Eve refugees were dropped off outside VP Harris house.