Reactions to a Nigerian man leaving his wife: Which kind wahala be this?

Entertainment
By Monica Brain On Dec 5, 2022 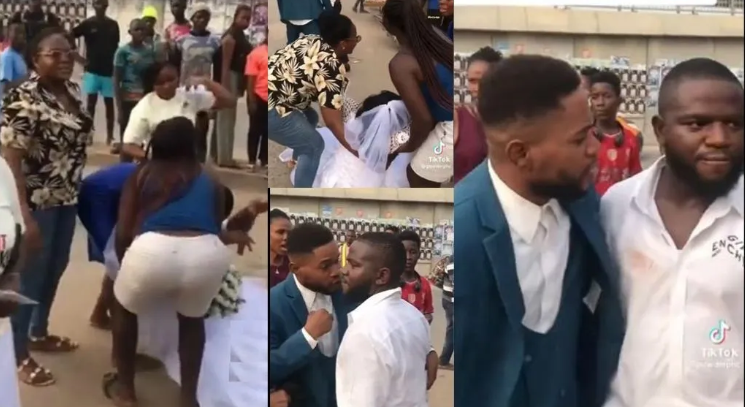 Reactions to a Nigerian man leaving his wife: Which kind wahala be this? Online users have responded differently to a video that shows a Nigerian man making a scene as he dumps his wife on the way home from their church wedding in Ghana.

In the viral video, the newlywed husband causes a stir on social media by asking for a break just hours after saying, “I do.”

However, the reasoning behind the choice is still a mystery as the wife begged desperately for assistance.

The middle-aged man insisted that he was ending the marriage immediately, despite the observers’ best efforts.

The husband and wife both declined to give a reason for the split, except the wife rolling around on the ground in her bridal gown.

“Bros, why nah calm down nah, what she do you now?” said a voice in the background. He claims he won’t get married again.

Read more: In The BGT Promotional Video Simon Cowell Instills Fear In Fans Who Are Unrecognizable.

ahudaddy09: You avoided a deadly cannon thanks to the hand of God, Lady! Yes, it hurts at first, but soon you’ll notice something new, and thank God for this disappointment turned to bless.

Gifted felix02: Before I go reasoning this thing, nah me this girl nah to find one boutique change clothes go one place chop.

dimzcorner_: Why publicly humiliate her? See, whatever his motivations, he could have waited until they got home and resolved it amicably between her and his in-laws if this wasn’t a skit or a spiritual manipulation. Haba! Age and appearance are not indicators of maturity and emotional intelligence, oo! May God indeed be with us.

enetimi sheila: slumlord laws highest level of mind my own business noticed the guy lying down after the video.

one of atlantaga: The man said, “I won’t do it again.” Who is that man saying, “Na by force, bros, why nah, why nah are you the ones facing what he’s facing”? Or maybe you want to manage their house for them. I’m not for people, sha.

He probably discovered what she was keeping, wanted a pound of flesh, and plathe real chestnot: What sort of psychological trauma is this? Why did you accept her into your miserable life if you knew it would turn out this way?

There are some men who sha. Why didn’t he decline before or even on the wedding day while in church? He had to wait, so he said, “I-do,” and drove until they arrived at a busy marketplace, fa! Before his useless self-rejecting! Some women refer to men as “scum” for these reasons. Ladies start to refer to them as scum after they leave. Is this not the behavior of a scumbag?

You May Like it :  Tim Allen denies flashing Pamela Anderson on Home Improvement.

Roma harts: Before judging the guy, consider his side of the story. Perhaps he learned something from her and retaliated against her.

NFL warns teams that its players may be suspended

Original Wednesday Addams actress Lisa Loring has passed away at the age of 64.