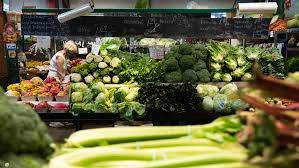 In 2023 grocery costs will rise by $1065 for Canadian families. Canadians won’t soon be able to avoid rising food prices. According to new research, food prices in Canada will continue to grow in the coming year, with grocery prices expected to increase by up to 7% in 2023.

According to the 13th edition of Canada’s Food Price Report, released Monday, the average annual grocery bill for a family of four will be $16,288 — $1,065 more than it was this year.

According to the study and Statistics Canada, a single woman in her 40s—the average age in Canada—will spend about $3,740 on groceries next year, while a single man of the same age will pay $4,168.

According to Sylvain Charlebois, lead author of the report and professor of food distribution and policy at Dalhousie University, food inflation is expected to remain stubbornly high through the first half of 2023 before beginning to decline.

In an interview, he stated, “When you look at the current food inflation cycle we’re in right now, we’re probably in the seventh-inning stretch.” “The first half of 2023 will still be difficult, but we can already see the end of this,”

Climate change, geopolitical tensions, rising energy prices, and the ongoing effects of COVID-19 are just a few of the variables that could impact food prices in the coming year, according to the report.

The price of food may also be affected by changes in currencies. A declining Canadian dollar could increase the cost of importing products like lettuce.

Read more: During The Holiday Season, Pepsi Wants You To Consume Soda Mixed With Milk.

The loonie was worth more than 80 cents US earlier this year, but it fell to 72.17 cents US in October as the U.S. dollar strengthened. It has been circling the 74-cent mark lately, closing Friday at 74.25 cents US.

The produce section will be the deciding factor, according to Charlebois. Produce is the highest category because “currency is one of the key things that could throw things off early in the winter.”

According to the report, vegetable prices could increase by as much as 8%, which would be the most significant price increase.

Most of the products sold in Canada are imported from the United States, which has been dealing with arid conditions and currency risks.

According to Simon Somogyi, campus director at the University of Guelph and professor at the Gordon S. Lang School of Business and Economics, “the western U.S., particularly California, has seen strong El Nino weather patterns, droughts, and bacterial contaminations, and that’s impacted our fruit and vegetable suppliers and prices.”

You May Like it :  A Brief note on How to sell your house without a realtor in California

He claimed that the drought was raising the cost of lettuce production. “It’s causing bacterial contamination, reducing the supply in the market, but also reducing the crop size.”

According to the researchers, prices are expected to increase by up to 7% in other important food categories such as meat, dairy, and bakery.

A farm gate milk price increase of about 2.2%, or slightly less than two cents per liter, has been approved by the Canadian Dairy Commission for February 1, 2023.

“The increase for February is reasonable, but it follows the unprecedented increases in 2022, which are still permeating the supply chain,” said Charlebois about the two price increases in 2022 that together amounted to nearly 8% of the market.

The report said that restaurant costs are forecast to rise by four to six percent compared to supermarket prices.

A year after food bank use hit a record high, rising prices will make food security and affordability even more out of reach for Canadians, the report warned.

According to a survey in the report, 20% of Canadians will likely turn to community organizations in 2023 for assistance feeding their families, and the growing reliance on food banks is anticipated to continue.

The report noted that weekly flyers, coupons, bulk purchasing, and food-rescuing apps also increased this year and is anticipated to do so in 2023.

Somogyi, who holds the Arrell Chair in the Business of Food, declared, “we are now in the era of the smart shopper.”

It is the first time for some generations that they have had to make a list, avoid impulse purchases, read the weekly flyers, use coupons, buy in bulk, and freeze what they don’t use.

The annual food price report predicted a five to seven percent increase in food prices in 2022; this would be the most significant increase ever.

When we predicted that food prices could increase by 7% in 2022, Charlebois said, “We were called alarmists.” According to him, critics labeled the report as “exaggerated.”

According to Charlebois, you could easily throw everything out the window with just one crisis. “We didn’t anticipate the war in Ukraine, which had a significant impact on markets.”

Bob McGrath, a founding member of Sesame Street passed away at age 90.

Reactions to a Nigerian man leaving his wife: Which kind wahala be this?